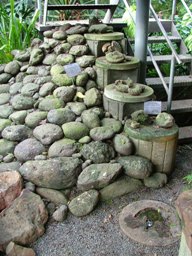 An area below the wooden deck has been set aside as an “Evolutionary Garden”. It enables  members of staff to demonstrate to students, school pupils and other interested people, the evolutionary route that plants have taken over the ages. There is a display of the different rock types found in South Africa laid out in chronological order of formation. The display shows how plants start out as simple mosses and over time became more complex through tree ferns and cycads to simple dicotyledonous plants such as Magnolias. This portion of the Botanical Garden is particularly popular with classes of younger school children, who are fascinated with the “jungle” atmosphere and “dinosaur footprints”. 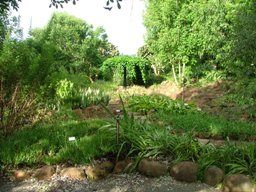 The Medicinal Plant Garden is an area designated to growing a variety of indigenous plants which are specifically used for medicinal purposes. The garden has a variety of uses, including:

Many of the most popular medicinal plants which are sold at “muthi-markets” in South Africa, can be seen in the Medicinal Garden, as well as a variety of other interesting species. 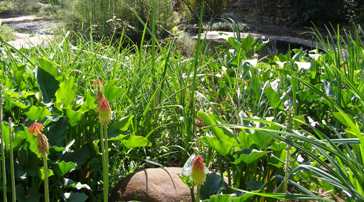 This area was developed as a growing area for aquatic alien invaders and other aquatic plants that are needed in the various teaching and research programs.  The overflows are designed to prevent any overspill of these plants thereby preventing contamination of the stream.  No fresh or clean water is used to top up these ponds.  Instead, the waste water from the water distillation units and incubators in the Research Centre laboratories is collected and piped down to the ponds.  As in other areas of the garden, every effort is made to try to ensure that ecologically friendly systems are set in place. The original natural veld was mowed by the University grounds maintenance for many years. In 2003 mowing was stopped with the intention of creating an area which would become a deposit for a wide range of plants from the KZN grasslands. Slowly such plants are being introduced. However just not mowing the area has allowed many of the original bulbs and forbs to re-emerge. In spring 2008 manyTulbarghia acutiloba flowered for the first time in decades. The grassland is alternatively burned or mowed each year in August.